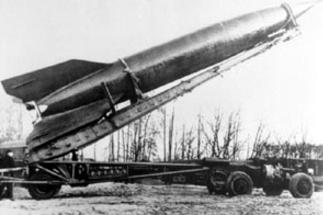 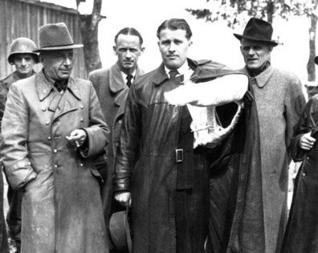 After the war, around 120 V2 rocket scientists moved to the USA to help them develop the missiles further. Von Braun launched a rocket from White Sands in New Mexico and took the very first picture from space in October 1946.

World War Two caused a tremendous acceleration in technology. In 1939 Britain still had 80 mph Bi-planes made of wood and string in the RAF. By 1945 we had the first 700mph jet fighters. Germany developed Jets, Rockets and tried to produce a nuclear submarine. The USA succeeded in building the world's first atomic bomb that eventually led to Atomic Power Stations.

The A4, renamed V2 for Vengence weapon, was developed under the leadership of Werner Von Braun. Since a teenager he was obsessed with rockets. His dream was to launch a satellite into Earth orbit and eventually land himself on the moon.  He approached the German Army about this idea in the late 1920's and they gave him some small facilities to work with to help with his ideas. Work on Rockets did not come under the agreed Versailles Treaty signed at the end of World War One; no rules were being broken.

As war broke out, his work accelerated and eventually produced the world's first Intercontinental Ballistic Missile; The V2 Rocket. The first factory was built at Peenemunde and was bombed by the RAF. New factories were built at Nordhousen, the last was at La Coupole just south of Calais. These were built by concentration camp inmates and were locked in the facility day and night. It was built deep underground and was thought impossible to bomb.

Britain's top war scientist, Barnes Wallace, produced a special bomb that could penetrate the ground and wreck the foundations of the factory rather than destroying it from the roof. They waited until the factory was almost complete then carried out the mission. It worked and no V2 rockets were completed or launched from there. But over 3000 were built at the Nordhousen factory and successfully launched against London, Ipswich, Paris and Antwerp.