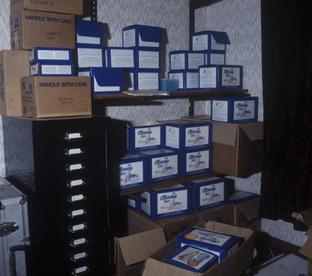 Some schools offer lessons on Career & Financial matters...
When pupils first leave school, it is natural to think of further education and / or obtaining a job. An alternative is to work for yourself. This does require skills, sometimes qualifications, money and self confidence. Such qualities aren't always in place when first leaving school. But a business can commence any time later in life. Peter knew someone who began his first business aged 55 and became a millionaire at 59 by just selling his own brand of Cat Litter.

The Astronomy Roadshow service has been operating since January 1994 but wasn't the first business Peter had tried. The first was a photographic portrait service when he was 18. He was interested in the technical side of photography and had a quality camera. He could only think of Portraiture of people and pets as a way of making a little money out of the skill. This later led to wedding photography. He found that bookings for weddings made him more nervous than the bride & groom so this was dropped rapidly. Industrial photography was tried but became dull.

Around 1986, a company called 'The Cambridge Diet' was offering a business opportunity for anyone. All that was required was to attend a simple course on the products / service, that included a little medical knowledge. The company was responsible for the advertising, gained customers and the names / address were distributed to signed up / trained suppliers. Suppliers would buy in stock and visit the customers.

Think of a business that you are genuinely interested in. Few companies are owned by people that just want to make money. Exceptions do include people such as Sir Alan Sugar. (I had one of his Amstrad car radios and didn't last five minutes, the replacement was the same... grrr).

Think of a service that could have a repeat turnover. A happy customer will return again and again without you finding new customers constantly; advertising is hard work and expensive, you don't get paid for it.

If you are involving other people, ensure that they are genuinely qualified (if qualifications are necessary) If they claim to have money to invest, ensure it really exists. Put any finance agreements in writing, don't rely on handshakes between friends.

Keep an interest in every part of the business, not just a part that you have a skill in.

Keep everything tidy and in working order; accounts, all paperwork, equipment, vehicles, even uniform if you need one.

Always back up every computer file related to the business on several drives / memory cards. Don't keep them all in one room. Put one copy in a fire proof safe and update it regular. Have spare parts for essential equipment.

Be honest with your customers. If you have to let one down for some reason for a technical hitch or illness for instance, just explain. Most people will understand. If they don't, don't let it depress you for long, just move on and find a way of reducing the chances of the same occurring again. Be honest with the taxman too.

Don't take advice from banks without researching the information away from the branch. The bank manager is not self employed, he / she isn't qualified to give advice on the running of your business. Never ever accept the line 'this offer is only available today' from anyone. If you need to borrow, search for the lowest interest rate thoroughly; don't accept the first offer.

Keep all costs to a minimum but without affecting the service. Don't purchase cheap equipment if it isn't going to last or offer poor quality results; build your own if you can. Don't buy in technology just because it's there, only if you genuinely need it and not just want it (as some do with smart phones and constantly upgrade - this keeps you broke).

Don't take advice from someone selling you something. Carry out honest research to check if what they claim is correct. (Peter was told that Planetarium domes from China were cheap rubbish. He sought a company, asked lots of questions and purchased from China anyway. The adviser was selling domes at 4x the cost of the Chinese). The Chinese domes were fine.

Be honest with yourself. Watch 'Dragons Den for extra wisdom. The Dragon's don't always get it right, but many pitfalls can be avoided by listening to them. Being in business is not as harsh as they sometimes make out.

AVOID; don't not use office talk 'We have looked at and overcome some challenging issues and moved forward to help our journey and fulfil our dream goal of becoming a leading brand 24/7 that...' you get the idea. It's so corny, just use plain English to investors, employees etc... many are sick of it.

Don't wait for all the conditions to be exactly perfect to commence a business or any other ambition. They never will be. Make do as you go along and push on regardless.

Above all, be realistic. If you try something that you realise isn't going to work, just learn the lesson and drop it. Another opportunity will come to you later. It may be a second or third choice (or an 8th in Peter's case) but at least you get something that works. Many people feel that just by thinking positively with total conviction that its going to work in the end; instead they simply run out of money, can become bankrupt or more importantly waste valuable time that is never replaceable and become totally disheartened. Peter was like that once.

This shouldn't be about just making money either, life is far more important than that. It should be about being more happy with your working life. If you can imagine yourself winning the lottery but would genuinely still choose to continue to run your service, then that's a good start. Any potential job can be looked upon in the same way. Finally; never loose the sense of adventure.... Good luck.

This ride at £1.50 a go is great. But not as great as a lift that existed at Bettshanger Coal Mine in Kent. I experienced it during a school trip back in 1979. It was a mile deep, we almost free-fell down the shaft and virtually began to float up in the cage like an astronaut. If you ever get the chance to fly in a jet fighter, just do it and don't worry about not being insured. Running your own business can require the same sense of adventure.

At one stage, he was selling over £1000 of stock a week by working part-time only and almost left his job to expand it to full-time. He purchased a sports car within weeks (he gained attention by several girls, it does work but shouldn't). Some bad publicity was then announced in the The Sun  mentioning it was a dangerous diet but without providing any evidence; just one doctor's opinion living in the middle of Wales. The business model collapsed within weeks. The product range was bought up by Slim Fast and still sells to this day.

In 1987, A 'friend' from his school days offered a business opportunity within the film world. The company was called 'The Movie Factory Ltd.' It was intended to produce TV commercials and a Film School. This would form a base for the making of a science fiction film at a later stage. By December 1989, it collapsed within minutes as it was realised that the qualifications and contacts that his 'friend' had were largely bogus. His business partner's only aim was to obtain a massive loan from an investor or two and vanish with the cash. Peter almost lost his home over it.

A total of seven business ventures were tried before the Roadshow. Experience grew and so did confidence in time. It was during a three month tour across the USA that a school teacher friend suggested an education service in teaching Astronomy. The name 'Astronomy Roadshow' was thought up literally within seconds and was entered in his diary.

Advantages over being employed;
Choose your own working hours / holidays. No interviews, exams or applications. Your income is more controlled by you rather than a boss; cut costs without affecting the service, improve or expand the service, work longer hours, advertise a little more, then see your income increase by perhaps 20% in one year. Nobody controls you, just the tax man.

Disadvantages of being self employed;
When anything goes wrong, you are responsible to sort it out. You are liable for your own pension, tax payments / calculations. This is easily completed on-line now. I usewww.taxcalc.com for assistance; a very low cost service independent from the Inland Revenue. You don't have to have an accountant for small businesses. I had one once and regretted it.

Taking any gamble in business is like a bet, but at least you can improve the odds yourself. If you mark out a career with a concrete plan, then that may be great and fits in exactly with what you want, but the achievement rarely exceed your expectations; just match it. Taking a gamble means you can win with a reward many times what you expected in the first instance. It depends if you prefer security or fun of the unknown. I've always opted for the risk / that includes chasing after girls too. Without risk taking, your options and achievements will always be limited.