Science Fiction stories and films can accelerate Science Fact. When Star Trek first appeared on TV in the USA, sliding doors were shown for the first time. A door manufacturer called the studio and asked where they were made as it was a neat idea. He was told that there just just two people behind the doors pulling on ropes with springs attached so the doors are pulled apart then the springs pulled them back. The manufacturer offered to produce some real electric sliding doors for the set ready for the next episode. Now we see them everywhere.

While at school, I put together a small group of science fiction enthusiasts and helped to produce two films. The first was made between 1977-79, the second from 79-81. The clip below was from the second movie... Flight 19.

A part of the team that helped make the movie 'Flight 19.'

On the left is Mike Phillips, now a geologist and the astronaut is Naz Rajan, businessman. Bottom right is Dave Web.

We are still best of friends. 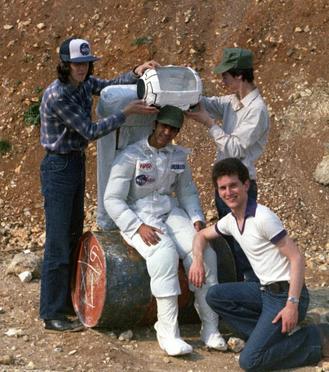