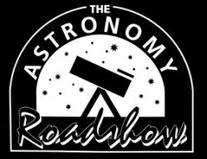 As it is this easy to produce a quality fake UFO photograph, we have to be very careful with such claims. The best method we have of finding them (if they exist), is to listen for their signals.

Physicist Enrico Fermi came up with a small 'spanner in the works' in the 1950's. He said that within the laws of physics, we would be able to colonise the entire Milky Way within

1,000,000 years. The galaxy should have given birth to civilisations such as ours at least 5,000,000,000 years ago. That is enough time for one single species to populate the galaxy 5,000 times over. If a thousand species evolved, that figure becomes 5,000,000 times over and so on. This hasn't happened; we would have seen remains of bases on the moon, machines left in high earth orbit, signals from nearby stars, something. We have detected dozens of earth type planets already around other stars, so with even better technologies, the earth itself would have been found many times over. They should be very common in our region and easy to find the evidence... So where are they?

This became known as Fermi's Paradox. 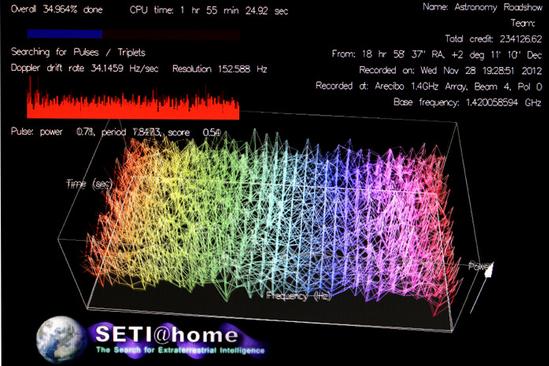 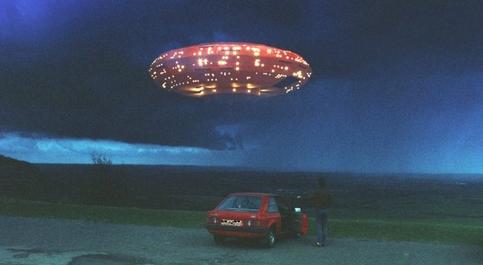 The SETI (Search for Extra Terrestrial Intelligence) research project is looking for artificial signals from the stars; signals that may be in the form of Radar or communications of some kind by another intelligent civilisation. This discovery would be the biggest of all time and can be made on your own computer. Just click on the picture above and follow the instructions under 'Get Started.'

Are we being visited now? Or are all these reports mistakes or fakes? A book with up-date information is on our books page.; Are We Alone? The Myth and the Science.

I built a model of a flying saucer out of balsa wood in 1987 and lit it with optic fibres. It took six months to build. This was photographed against a black cloth and double exposed with a stormy scene.

The Rosetta screensaver carries out research on various diseases such as Cancer, HIV, Alzheimer's etc. One of the aims is to find a protein that can be added genetically to such cells and turn off its reproductive systems that will allow the diseased cells die off. Other forms of research along these lines are continuously added. The more people that join this site, the faster such cures can be made. Full instructions of how to get this screensaver is available once you have downloaded the 'BOINC' software as mentioned above for the SETI screensaver. Look for the Rosetta Project and attach it to your project. A full write up of this is in our book;

Are We Alone? The myth & the science.