Partial Solar Eclipse from our driveway; 2005.

The telescope was purchased by Peter in 1978 with money earned from his paper round and is still used today. He never blew hard earned money on sweets, instead made purchases that would last a lifetime.

At school, he didn't excell, but continued his studies in Astronomy & Spaceflight. As no school courses were related to this at the time, his knowledge rarely showed in his work; Physics was the only exception. His career advisor actually laughed when he said he wanted to become an astronomer. In 1980, Peter left school, worked for a soft drinks company, then for Royal Mail. 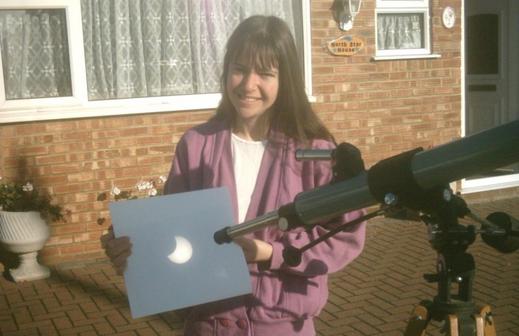 By 1997, competition within the Planetarium market increased. A marquee was designed to house the dome so outdoor events in parks, county shows etc could be catered for. One was held at Riverside Country Park, Gillingham in May 1998 and was featured on local TV News. Amanda Mitchell attended this event, and two years later married the presenter. She is now full-time Roadshow secretary. 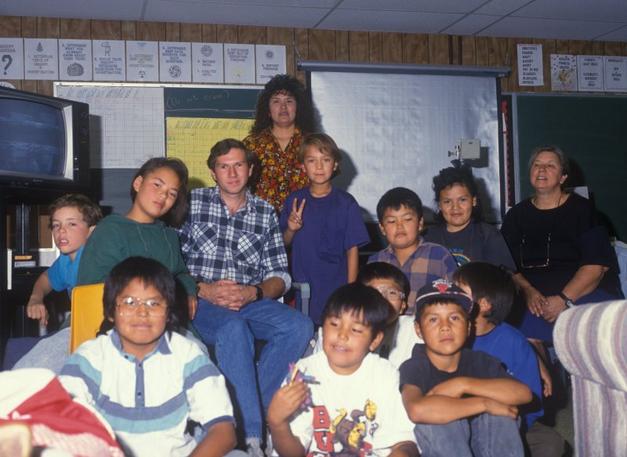 On the left is Terri McIntyre and her husband Doug. Terri gave Pete the idea of a planetarium business back in 1992 - forever in her debt. The picture was taken at their home in Sanders, Arizona August 2014 just hours before a massive storm.

On the final day with the Post Office at Rochester, the press became interested in the story and Peter managed to get on the front page of the local rag. This was picked up by TV South News and was interviewed. The dome was erected for the very first time in Vinters Park TV studio at Maidstone. A mail-shot went out and the bookings came flooding in; the first was on 31st Jan 1994 in Berkshire.

During this time, Peter met another good friend, Russell Milgate. Between them they came up with the idea of providing large scale public events. It would have included four marquees with models, space flown hardware, meteorites, observatory, planetarium, gift shop etc. Russell produced the original website and models. The project became too large for the financial resources available and had to be abandoned.

Peter Bassett FRAS became interested in Spaceflight & Astronomy aged five as he saw the Apollo 8 mission on TV; 24th Dec 1968. A live broadcast was made from lunar orbit by astronauts for the first time in history. Mum pulled back the curtains and they both saw the moon in the sky at the same time as the broadcast. It was the start of a life-long hobby. At the age of Ten, he predicted that Saturn's rings would be braided at the edge due to the gravity of its moons and the dust in the rings would pile up due to magnetic fields. Seven years later Voyager 1 reached Saturn & discovered the braided edge rings and dust piling up.

1992; Peter, feeling a little low, decided to take 3 months off work to do some travelling across the USA. Upon reaching friends in Sanders, Arizona, they suggested that he could become a specialist educator in Schools. He would need some dedicated equipment & props etc, advertise to thousands of schools and hopefully obtain some bookings. He previously remembered seeing adverts in a magazine called Sky & Telescope of a portable planetarium. Upon returning to England, he discovered a friend, Pete Golding, had ordered such a Planetarium by coincidence. At work, talk was rife regarding voluntary redundancies. He took the chance and applied. This paid for some of the equipment and the rest from savings and a loan against his home.

Advice for everyone; Do at least consider and investigate every opportunity that comes your way whether it be a hobby, job, course, investment or relationship. It may not still work out but at least you know the answer. Otherwise you may face a lifetime of thinking 'What if...?' Taking a gamble can provide something extra that you couldn't even dream of beforehand.

This was at Sanders School, Arizona; October 1992. This was the very first talk Pete ever gave in the USA. The children are Navajo & Hopi native Americans. Terri McIntyre is on the far right; she gave him the idea of a schools lecture service just a couple of hours later in her kitchen. It is true to say that most business ideas begin in a kitchen, nobody knows why. 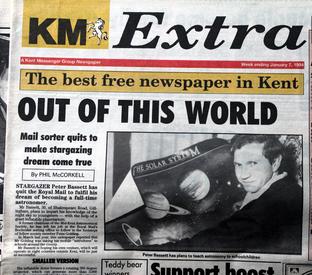 Today, around 230 planetarium bookings are made each year, plus a handful of public talks on Searching for Aliens, Satellite Spotting, Solar Power.. a full list on the Public Lectures page.

Amanda was a late starter to Astronomy compared to Peter and didn’t get interested until the age of 22. She purchased

a second hand book on the subject and enjoyed it. The main attraction began by watching the Cosmos series by Carl Sagan. She was so inspired by how vast the universe was. The way that Carl Sagan explained everything so well on the video that it could be easily understood / she was hooked!

After more than 3 years of studying the subject from books, videos, finding her around the night sky with binoculars was quite solitary. One day her mum brought home a leaflet and advertised an Astronomy Club that were holding a Public Event Day with a Mobile Planetarium. She went along with a couple of friends.  They had a great afternoon meeting club members, looking at all the displays, and best of all going in the Astronomy Roadshow Planetarium.

After that day, she decided to go along to the Astronomy Club who met every other Friday and soon became a member. Two months after joining, she went on a club outing to Portsmouth where Patrick Moore and other Astronomer’s were lecturing, She was then asked out by Peter. A year later got engaged at the 1999 Total Eclipse in Cornwall and in August 2000 they were married.

Peter had started the Astronomy Roadshow in 1994 and the admin side of it was getting out of hand as he was on the road such a lot, so in 1999 he employed her as his secretary 2 days per week to keep the bookings under control and deal with paper work...now full time. They both still attend the Astronomy Club regular.

Thinking back, if it wasn’t for the late Carl Sagan who inspired her so much with first watching those Cosmos videos she doesn't think that she would have got interested in the subject and never would have gone along to the Astronomy Club, or met Peter & had a career in Astronomy. She owes it all to that Carl Sagan video - Cosmos!

Apollo 8 spacecraft in Chicago 2014; seen it at last