A Typical Star- may exist for billions of years converting hydrogen into helium. In around 4.5 billion years, the sun’s core would have used up most of the hydrogen. Hydrogen-Helium fusion will cease. The outward pressure generated by the heat is now largely lost. The core’s gravity takes over, and compresses the helium into a much smaller volume. At a critical moment, if the temperature reaches 100 millionºC, the Helium will begin to fuse into Carbon (known as the Helium Flash). So much heat is now leaking out toward the surface, that the upper atmospheric gases (still mostly hydrogen) will overcome the force of gravity, and will expand. The heat will be more spread out within this new upper layer, so the surface temperature will cool from around 6000ºC to 3000ºC. The colour will now change from Yellow, to Orange then to Red. The sun has now become a Red-Giant star. Its diameter is now so great that Mercury, Venus, and the Earth have met their doom inside the sun’s upper layers. Most stars will undergo the same life story, but the star’s mass will determine the final outcome.

Birth of a Star... The key factor in a star’s life span is its Mass. No other factor is as important as this. A star is formed under the gravitational force within a cloud of hydrogen gas-Nebula. The hydrogen reduces in volume, the pressure within itself increases. The greater the mass of the whole cloud, the greater its gravitational pull, and the faster the whole process takes place. Temperatures will rise as the contraction continues. If the temperature at the core reaches a minimum 9millionºC, hydrogen gas (single Protons) will fuse together. One of the protons will emit a Positron & a Neutrino; it will convert into a neutron to form Deuterium, then another proton may fuse to produce Helium-3. During this reaction, a Gamma Ray is released. As the core is so dense, the Gamma radiation will ‘bump into’ other atoms at the speed of light. During each collision, the gamma ray looses a little energy. It will drop in frequency. A million years later, the radiation will reach the surface as ultra-violet, light, infrared etc, and radiate outwards across the universe. (Neutrinos will shoot out of the sun and into space at the speed of light as if the matter in the sun didn’t exist – we still don’t know how). A star is born. 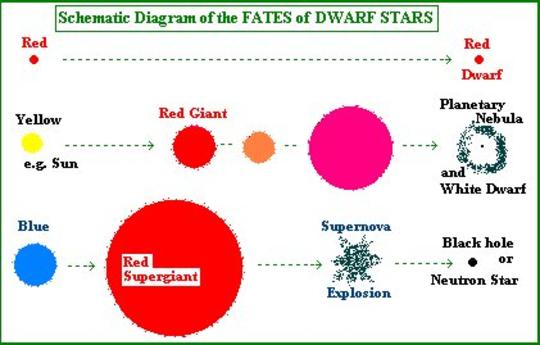 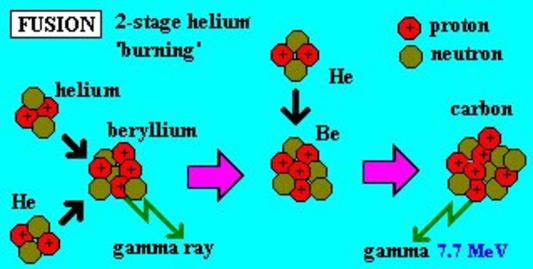